Ferrets have their own unique personalities, much like humans, which is why people are drawn to them. They are active a little before sunrise and just after sunset. They have a high metabolism rate, so they have periods where they eat, relieve themselves, and play for a bit.

Why Do Ferrets Sleep So Much?

Ferrets are known to sleep for 18 hours, covering most of the day and night. People thought they are awake at night, but they’re not. Although when you have to wake them, make sure that they are fully awake before moving them completely from where they sleep.

As your ferret likes to sleep in dark or hidden places, they’d need to adapt themselves to the light and become fully awake. If you don’t let them complete this cycle, you risk being bitten. Given their adaptability, they will follow your sleeping habits. Here are a few reasons why they sleep so much:

1. It Is Part of Their Nature

They are awake a bit before dawn and dusk, so don’t worry that you might have issues sleeping at night. Once you bring home a ferret, they may take a bit to get used to how you sleep.

But once they get a feel on what time you play with them and sleep, they’ll pattern their sleep habits with yours.

They are almost similar to other pets as they need time to let off energy, but as they only spend a few hours active, they’ll immediately nod off to sleep after they eat and relieve themselves after a few hours of activity.

Ferrets sleep longer when they’re to adjust to an unfamiliar environment. A pet ferret  won’t show any signs that they don’t like the new surroundings, or that they are anxious or afraid of the new environment.

Although if your location is too noisy, they will always show interest in what they hear. Especially if you allow them to roam free, they’re like kids who will explore what catches their interest.

At most, ferrets are only awake around three to four hours a day where they eat and play until they fall back to sleep. In an unfamiliar environment, they may take about 16 to 18 hours of sleep and they are most active in dusk and dawn.

Ferrets are known to come from the Northern Hemisphere, where the weather can get to freezing levels compared to everywhere else.  So if your home temperature is cold, they will naturally sleep better, as it is their habit in the wild.

They often find it hard to find food, so sleeping longer lets them save their energy.

How Do Ferrets Sleep?

Ferrets sport a long body that is flexible, especially when they’re sleeping. As soon as they close their eyes, they don’t mind how long they’ll sleep. As long as they’re comfortable, they can sleep several hours in a position or two.

If you’d like them to use beds, ferrets prefer sleeping on a soft surface, which can also account why do ferrets sleep so much. You can either make use of shredded pieces of paper or high-quality hay. If you want to go extra special, you can use a towel, blanket, or nesting box.

Choose your detergents carefully when you wash dirty beddings because there are ones that are dangerous for your ferret.

If you will keep one in a cage, make sure you give it a place to sleep like hammocks. We recommend the Niteangel Hanging Hammock as it provides not just a sleeping place, but a place where your ferret can play. 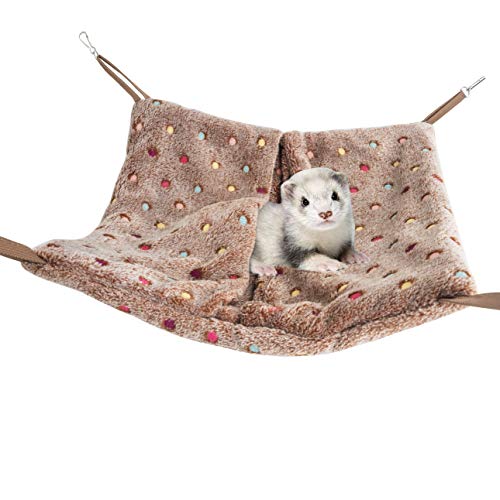 Ferrets love to sleep with others of the same or opposite sex, as it is very social and gregarious.

No, ferrets are not awake at night, but only before dusk and dawn.

They are not competing with anyone for the food, as they are only awake 2-4 hours at most, and asleep for a good 16-18 hours. Ferrets awake just before dawn and dusk, but as soon as they are familiar with when you sleep, eat and work, they can adapt their habits to yours.

What Affects Your Ferret’s Sleeping Habits

Ferrets at a young age, sleep more compared to when they get to adulthood, about 20 to 22 hours. This is also the same for older ferrets. During their kit stage, they need to nurse every couple of hours and then sleep. They are also easy to wake up, so more time to play

For young to adult ferrets, they sleep about 18 hours a day. They will start out being awake near dusk and dawn, so you won’t need to think about being woken up at odd hours during the night.

Want to get an idea of your ferret’s age? Take a look at our guide here.

Ferrets adapt, as most animals can be domesticated as pets. They will match the habits of their owners.

They can be great for career people, as you’ll be gone for most of the day and will definitely hit the sack once you get home. Your ferret will surely adapt your habits and spend more time sleeping. If there’s nothing to do, why not sleep?

But expect that if you engage your ferret to play, after an hour or two you’d probably see it dozing off to take a rest.

If you sometimes get surprised that your ferret sleeps most of the day off, expect your ferret to sleep more when winter comes.

Asides from adapting to your sleeping habits, ferret’s bodies can also adapt to changes in season. This all happens automatically, but best to help your ferret along by making sure they have access to natural light so that they can go through the natural change on their own.

If you keep your ferret in artificial light for most of its life, you risk a chance that they may develop diseases.

You also need to make sure your ferrets are safe and in a suitable environment. If the conditions are not too good, and there is a lot of noise, your ferret may tend to be anxious.

As ferrets love to dig, they can get out of the smallest of spaces. Make sure your cage wires are adequately spaced so that your ferret cannot wiggle out of them. They are also known to pass through feed hoppers just to escape.

The wire cage should at least be 3 ft. wide by 3 ft. deep by 2 ft. high with a room big enough for the ferret to move around while it’s confined. You can take a look at our guide here to determine the cage’s size as per the number of ferrets.

Ferrets prefer cold temperatures, so they’ll sleep better if your home is of the same condition. But be careful of sudden drafts, as it could cause colds in your ferret. Your ferret can tolerate cold temperatures as long as they have dry housing and have ample food within reach.

The Mystery Behind the Ferret Dead Sleep

What Is the Ferret Dead Sleep?

Ferrets often sleep so deep that it seems like it is dead. You can do anything to the ferret, but since it’s so comfortable sleeping, it will do nothing. There’s no known reason it happens, but is completely normal.

There’s no known reason it happens, but is completely normal. It might be your ferret is too tired, but since it went to a dead sleep, it means it was comfortable enough to trust you. It might also mean that they’re comfortable with the space you provided to them.

What Can You Do When It Happens?

If you’re not familiar with the ferret dead sleep, you might panic if it happens to your ferret. Fret not, just check if it’s warm, or his mouth still has a pinkish color. You can also check if it’s still breathing. If you can tick off on all conditions, then you can rest easy.

FAQs on Why Do Ferrets Sleep so Much?

1. What Should I Do if My Ferret Sleeps More Than Usual?

While your ferret is sleeping, you might be asking yourself why do ferrets sleep so much. It is best to keep watch over your ferret from time-to-time and observe any changes in its demeanor.

Once your ferret wakes up, go through the following paces:

2. Should I Let My Ferret Sleep in the Dark?

There’s nothing wrong with your ferret sleeping in the dark as it prefers those conditions when it’s time to rest.

3. Should I Keep My Ferret in a Cage?

If your ferret will not be under your direct supervision, or if there’s no one to watch it, better to keep it in a cage. It is highly inquisitive and very active, so something untoward might happen if you don’t observe them.

Now that you know what you need to look out for when your ferret does something different especially when it sleeps, make sure you address everything your ferret may need. Keep them safe and in an environment where they won’t feel anxious.

Know whether there’s something wrong with your ferret.

With the way ferrets sleep, it’s often difficult to know why do ferrets sleep so much. But armed with the right information, you’ll understand their sleeping habits and know if there’s anything wrong with them.

Thanks for visiting SumoPet.com.  We have pets (dogs, ferrets, cats, fishes…) and love to share our pets care tips and tricks with you!  Assume those links are affiliate links which means I may earn a commission if you click and buy.  As an Amazon Associate we earn from qualifying purchases.

Back to Top
Close