I couldn’t believe I was so naive to be tricked into thinking that this is a single ferret! Honestly, I thought it was the biggest ferret ever and was sure that it definitely held some sort of a record, maybe a Guinness book or something.

But as I discovered that there were 2 ferrets in the tube, I actually started thinking, How Long Do Ferrets Grow? And what is the record length of a ferret.

To my surprise, the Guinness World Records has refused to accept any applications for the world’s biggest or longest ferrets. This is done in the ferret’s better interest, as they do not want any ill treatment imparted on these furry creatures to alter their growth.

Hence, we have no way to know the biggest ferret, but we can surely know how long the ferrets are on average! So, read on to know more about how long do ferrets grow.

How Long Do Ferrets Grow?

Just like many other sexually dimorphic animals, male ferrets grow longer as compared to female ferrets.

The most accurate calculation of the ferret’s length can be done while he is in a sleeping position, measuring from the tip of his nose to the tail.

The average length of male ferrets is around 20 inches. This length ranges between 18 to 24 inches. Female ferrets measure approximately 17 to 18 inches in length.

3 Different Type of Ferrets Based on Their Body Type

The length of a ferret also varies depending on its type. There are mainly 3 types of ferrets:

As the name suggests, these are the largest in size.

These are the most commonly found ferrets. Most widely used as domestic ferrets.

These ferrets are the smallest in size and therefore are playfully referred to as the “pocket friendly version” of ferrets.

Take a look at the video below, and you can see for yourself, how the bulldog and whippet ferrets differ.

Growth Chart for a Male Ferret

Similar to many other pets, ferrets are sexually dimorphic in nature. This means that if you have a male ferret, you can expect it to grow more as compared to the female ferret.

However, you might not be able to spot this difference immediately. When born, a baby ferret, irrespective of its gender, is of the same size. The difference starts to be noticeable at about 3 weeks age, and the growth rate drastically starts differing from the 5th month.

You might be interested to look at the below growth chart if you have a male ferret. Above all, it is important to note that the below values are average values, and your ferret might not follow the same exact growth rate.

As you can observe in the above table, a male ferret’s weight tends to almost double up in the initial few months.

A black footed ferret on average is 15.5 inches long.

After the initial few months, somewhere between 4 to 6 months, you can expect your ferret to stop growing. This is also the time when your furry friend will possess reproductive capabilities.

Growth Chart for a Female Ferret

Though female ferrets are of the same size as male ferrets during birth, you might be surprised to know that there is a considerable slow growth if we consider the growth rate after 3 weeks.

Take a look at the below table to understand the growth of a female ferret, and how it differs from the male ferret.

It is very evident from the above table that female ferrets, even though have almost the same height as male ferrets, pack a little less weight in the subsequent months. Not only that, but their body length is also lesser when compared to the male ferrets.

Y-axis: Weight of ferret in grams

Y-axis: Length of ferret in inches

Probably, this might be the only reason why there is a difference between the weights of male and female ferrets.

What Is the Average Length of Ferrets?

Since ferrets are sexually dimorphic in nature, the length of a male ferret is more as compared to the female ferret.

The length of ferrets is calculated from the tail to the tip of the nose. For more accurate results, you should measure your ferret in a sleeping position.

The average length of male ferrets is roughly 20 inches. Some male ferrets, larger in size can measure up to 24 inches, whereas the shorter ones measure around 18 inches.

For your ferret’s well being and comfort, it is important that you select a properly sized cage. The litter box, food bowl, and water bowl, all should be properly placed, with ample space for your ferret. Check out our extensive guide to ferret cage size here.

What Is the Average Weight of Ferrets?

It is already an established fact that male ferrets are bigger in size if compared with female ferrets. And the weight aspect is no different.

Apart from gender, whether a ferret is intact or neutered also affects its weight.

When Do Ferrets Stop Growing?

Considering that the lifespan of ferrets is 5 to 10 years, it is quite obvious that their growth stops at quite an early stage of life. So, you can expect your young ferret to stop growing between 4 to 6 months of age.

Your ferret is also fully capable of reproducing at this age. A female ferret has faster pregnancies, and the duration is only 39 to 42 days.

You can consider a 4 month ferret as an adult ferret, whereas 4 years or more than that are older ferrets.

As a ferret owner, you should take utmost care in providing proper vaccinations to your furry friend, and their booster doses at various stages of their lives. Check out our detailed guide on ferret vaccinations here.

A fun fact: you can check your ferret’s teeth to determine his age! Check this out.

Does Neutering or Spaying Affect a Ferret’s Growth?

When neutering is performed too early, around 6 weeks or so, then it will definitely hamper the ferret’s growth. Neutering reduces their growth spur, which usually occurs between 9 to 11 weeks.

If done at a proper time, at around 3 to 4 months, neutering the ferret facilitates in maintaining a healthy lifespan for your ferret.

In case you are not interested in breeding your domesticated ferrets, you should get them neutered as soon as possible or as they reach their sexual maturity. Once your ferret is 3 to 4 months old, he can be neutered surgically. Breeding ferrets indeed requires a lot of time and money effort from the owner’s side.

By vasectomizing your male ferret, you can prevent the stink bombs that male ferrets tend to release from their scent glands during the mating season. Intact male ferrets also tend to become extremely aggressive.

If we talk about female ferrets, they are at risk of adrenal disease if they are not neutered. This is because female ferrets stay in heat till they are bred. This will cause the release of reproductive hormones in excess by the very active adrenal glands.

Whenever you see any of the above mentioned signs, rush to a veterinarian immediately.

What Is the Ideal Ferret Diet for Healthy Growth?

Since your pet ferret is an obligate carnivore, his diet should only consist of protein and fat. That’s ferret’s balanced diet! No fibers, no sugars if you want a healthy ferret. Sugars can lead to insulinoma in your furry friend.

Below are a few of the best raw meats that you can feed to your ferret.

You can also give your ferret these yummy treats available in pet stores. 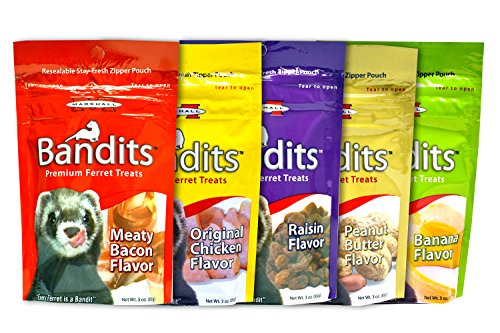 Avoid feeding the below items:

FAQs on How Long Do Ferrets Grow?

1. At What Age Do Ferrets Calm Down?

As ferrets get older, 4 years and above, they tend to calm down. Older ferrets will remain active and alert, however, their playfulness and energy will decrease with age.

A 4 to 6 year old ferret may not be able to play for many hours, as opposed to the 5 to 7 hours of playtime he had while he was young.

It is possible that a ferret may die suddenly, without any previous health issues. They can get ill and die suddenly.

Unneutered female ferrets, who are unable to mate can also die due to the lack of breeding. The excessive doses of estrogen released in a female ferret’s body during heat can lead to aplastic anemia. This is a fatal condition, which can lead to the ferret’s death.

3. What Is the Best Age to Neuter a Male Ferret?

Male ferrets can be surgically neutered once they are 3 to 4 months of age. Once neutered, the male ferret will lose its typical characteristic smell. And you can also expect him to be calmer than before.

Even though they can be neutered at 3-4 months, the best age to neuter a male ferret is 6 to 7 months, when they have matured.

The answer to How Long Do Ferrets Grow is that they attain a length of 18-20 inches if it’s a male ferret and 17-18 inches in case of a female ferret. This is achieved till the age of 4 months, and then you can expect a stop in your furry friend’s growth.

For a healthy ferret life, proper vaccinations and proper diet plans should be rigidly followed for these species, as they are exotic pets, and have special dietary needs.

Thanks for visiting SumoPet.com.  We have pets (dogs, ferrets, cats, fishes…) and love to share our pets care tips and tricks with you!  Assume those links are affiliate links which means I may earn a commission if you click and buy.  As an Amazon Associate we earn from qualifying purchases.

Back to Top
Close